I recently had the chance to spend a day swimming with stingrays and put together the video you see above. Here are some facts about stingrays.

Some cool facts about stingrays in general

Here are some of the stingrays you’ll see in the video.

Description of The Cownose Ray

Typically, cownose rays have a white-yellowish belly and a brown back. Their head is broad, their eyes are wide-set and they have very distinctive lobes on their subrostral fin. In their mouth lies a set of dental plates used for crushing oyster shells and clams. Commonly feared is a barb at the end of their tail that’s used to defend themselves. Their tail is twice as long as their bodies.  In a spine, close to their body that has toxins that can cause symptoms that are similar to being stung by a bee.

Cownose rays have a distinct shape with long, pointed pectoral fins or “wings” that are separated into two lobes at the front of their high-domed heads – creating the cow-nose shape.

Known for their stingers, cownose rays are actually very docile creatures. Usually, they can be seen jumping out of the water and landing on their bellies, which makes a loud smacking sound. While a lot of rays rest at the bottom of the water, cownose rays love to be at the top. They are very active swimmers.

Size of The Cownose Ray

Breeding for Cownose rays occurs from June through October when varying sexes gather in shallow waters. When a female is ready, she will swim with the edges of her pectoral fins sticking out. A male will try to grasp her fin to mate with her. Maturity for breeding generally starts for males and females when they are 4-5 years old.

Offspring of The Cownose Ray

Once they have mated and conceived, an embryo will grow within the wing folds of the body. Starting out, it is nourished by egg yolk but is later nourished by uterine secretions. It is believed that gestation lasts somewhere around 11-12 months. During which time, the offspring is born tail first. Rays, like sharks, are ovoviviparous, which means that the female produces eggs, which hatch internally so the young are born live.

At birth, a cownose ray is 11-18 inches wide. Cownose rays generally have 1 pup per litter.

As bottom-dwellers, cownose rays typically diet on hard clams, mollusks, crustaceans, oysters and other invertebrates. They suck in food through their modified fins so they can crush food with their dental plates. Because they generally swim in groups, the synchronized wing flaps help to uncover buried oysters and clams. They usually feed in the late afternoon or early morning hours.

Due to a set of super senses, rays have no trouble finding food. The special gel-filled pits on their face called, Ampullae of Lorenzini (named after 17th-century ichthyologist, Stefano Lorenzini who discovered them) allows them to pick up on electrical signals from animals who move around them.

Migration With The Cownose Ray

Typically, cownose rays migrate from the Gulf of Mexico to Brazil, Trinidad or Venezuela, in late spring and late fall. This is usually caused by water temperature and sun orientation. They can also be seen migrating to Maryland and Virginia where there are schools.

The Chesapeake Bay is a great place to find cownose stingrays from May-October. They travel as far north as Kent Males. Males, however, leave the bay in June-July.

Habitat of The Cownose Ray

Cownose stingrays like to live in marine habitats or brackish areas and are usually found at a depth of 72 feet. They can migrate in schools for very long distances.

Description of the Southern Stingray

Southern stingrays have a flat, diamond-like body that is a brown-olive color with a white underbelly. The barb on their tail is serrated and covered in venomous mucous and used as a defense against predators. Their wing-like pectoral fins are not only used to propel them across the ocean but are also to kick up prey. Their eyes, which sit atop their heads are accompanied by small openings called spiracles. Spiracles allow the ray to take in water while they are lying on the seabed or buried in the sand. Water enters through the spiracles but leaves through the gill openings and bypasses the mouth. This is how they obtain their oxygen.

The behavior of The Southern Stingray

Found on their own or in pairs, Southern stingrays exhibit wave-like locomotion through the use of their pectoral fins. This allows them to escape predators and forage for food. When threatened, they raise their tails like scorpions and try to stab their predators. Generally, they swim away from predators versus trying to attack.

Most commonly, stingrays will visit places that are referred to as cleaning stations where small fish will clean the mucus and parasites off their bodies.

The tail can be twice as long as the body

Little is known about the mating ritual of Southern stingrays but it is believed that a male chases a female and bites her fin. After the two have mated, the male will release the female’s fin. Studies have also shown that male and female stingrays communicate through pheromone signaling. Upon giving birth, the female releases pheromones that are produced in her cloaca, or at least, that is where it is theorized that these pheromones come from. This attracts male stingrays and females can immediately mate again.

Southern stingrays are ovoviviparous, which means that they are protected by their mother within her body in a yolk sack early on in their embryo stage but then, later on, are protected by the mother’s uterine milk. The yolk sack gets absorbed. Once the offspring is born parental care no longer exists for the juvenile. The gestational period usually lasts 135-226 days and normally, 2-10 pups are born per litter. They are dark gray at the time of their birth and lighten up as they age.  From birth, a southern stingray can defend itself with its sharp, serrated barb.

Known as nocturnal predators, southern stingrays spray water from their mouths and/or flap their fins to disturb and expose hidden prey. This is how they feed. They will travel large distances and swim along the tide to find more food. They typically feed on fish, crabs, shrimp, shellfish, worms, and crustaceans.

By detecting movement through the electroreceptors on their snouts, they can find hidden prey by blowing water through their mouth and flapping their wings.

Found in the tropical and subtropical waters of the western Atlantic Ocean, the Carribean,  the Gulf of Mexico and the coast to southeastern Brazil, southern stingrays make a home in shallow coastal waters. They prefer a depth of 180 feet and like to stick to areas that have lagoons or coral reefs.

This past April, two-spotted eagle ray pups were born. This species is listed as “near threatened with extinction”, and stingrays as a whole are reducing in number. So the news of this exciting birth brings hope to the survival of stingrays. 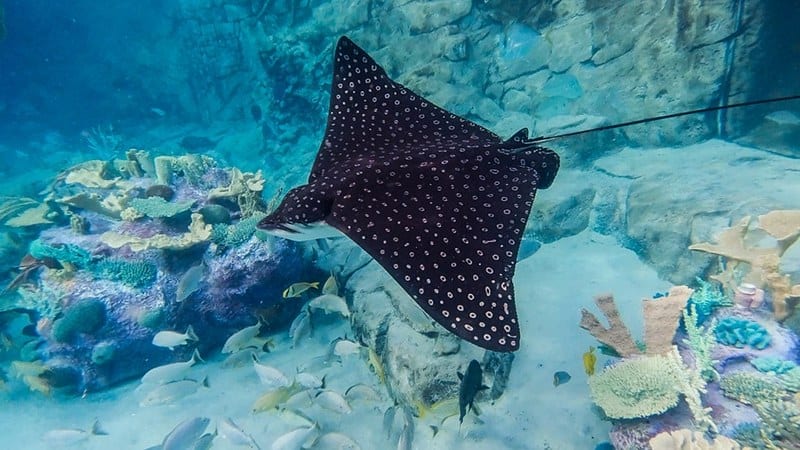 Known distinctively for their spots or rings, spotted eagle rays also have a disc-shaped dark blue body and a flat snout that looks similar to a duck’s bill. Just like all stingrays, they also have a long tail with a venomous stinger and pelvic fins. It has five gills on either side of the front half of its belly and 2-6 venomous spines that can be found beneath its pelvic fins.

Mostly seen alone, spotted eagle rays will sometimes swim in groups. When they do swim in groups, they can be seen in groups of 50-100. When they are not foraging for food, spotted eagle rays can be found gracefully swimming or flying through the air. Their large pectoral fins help boost speed and allow them to glide through the water with ease. They enjoy staying in the same place throughout their life, they will journey to others but typically, they always return home.

One or more males will pursue a female during mating. Just like most stingrays, the male will use his jaw to grasp the female’s pectoral fin and roll her over. While belly to belly, the male inserts his clasper into the female. This usually takes less than a minute and a half.

Spotted eagle rays are ovoviviparous, which means the eggs are retained and hatched internally. They have a gestation period of one year, after which, the female ray will give birth to 1-4 pups. Rays mature between 4 and 6 years old.

Spotted eagle rays generally feed on small fish, hermit crabs, mollusks, octopuses and crustaceans. They use their snouts to dig into the sand and unbury their prey. By using their calcified jaw and chevron-shaped teeth, they can easily crack open hard shells.

Studies show that spotted eagle rays are more active during high tides. When they are not active, they like to dig their snouts into the sand and bury themselves in a cloud of sand that they spew from their gills. They can generally be found in bays or reefs and they spend much of their time swimming in open water, close to the surface.

While there is much concern about the dangers of stingrays, the barbs have been removed at Discovery Cove and they are checked regularly. This allows people to safely swim and feed the stingrays without the fear of getting stung. So if you’re planning a trip to Discovery Cove anytime soon, rest assured that all precautions are being taken to keep you and your family safe.

Chris spends his time photographing and taking video of wildlife and nature. He spent 2 years in high school studying forestry (Gainesville, FL) and is currently studying to be an Advanced Master Naturalist at the University of Florida. His mission is to inspire others to get outside and learn.
View all posts by Christopher
Swimming Pigs On Pig Island in The Bahamas
The Stewart Homestead Murders 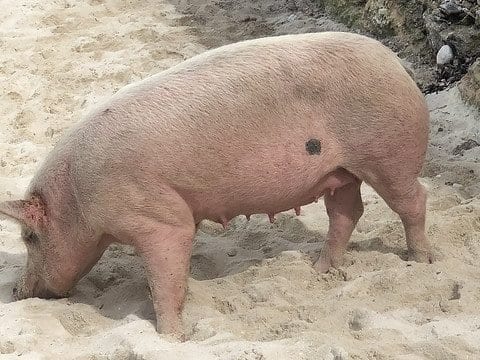