I run into Florida softshell turtles all the time while hiking in Florida. They have a strange looking nose and I’m almost always stepping over them as they lay eggs along my hiking trail. I shot this video recently while out along the St Johns River in Florida and the photos below were taken last year.

They are dark brown to olive green in color and Florida Softshell Turtles have a leathery flat carapace and a cream-colored underside. Their neck is elongated and they have a long round, snorkel-like nose. Their feet are webbed with sharp claws. Females have thinner and shorter tails than males. 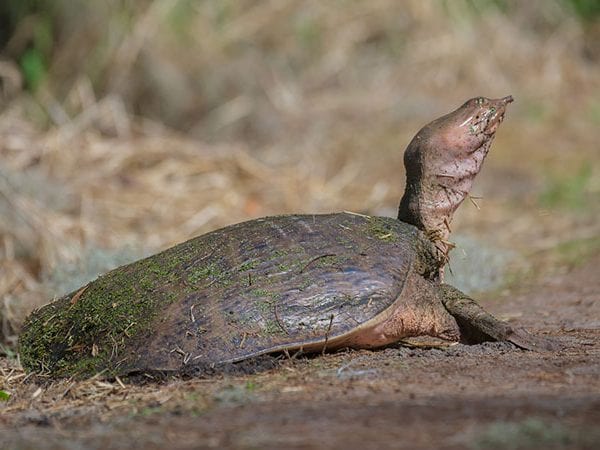 A juvenile turtle is olive to yellow in color with grey spots and yellow lines. They have orange and yellow markings on their head while their plastron is gray.  As they age, their markings will start to fade.

Predators include alligators, fish, raptors, skunks and raccoons. Typically, these predators are more feared during the nesting period. They can secrete a musky odor that can ward off predators, allowing them to escape effectively.

Florida Softshell Turtles spend almost their entire life in the water but will emerge from the water to either bask in the sun or lay their eggs. On land and water, they can move very fast which allows a safe escape from predators. While on land, they can be seen under sand or mud and while basking, they can be seen on logs, muddy banks or floating vegetation. While under water, they get oxygen by pumping water in and out of their throats.

They hunt and chase down their prey while also scavenging local areas for food. Florida Softshell Turtles will often bury their entire body in the sand with only their heads exposed so that they can stalk their prey and attack when it comes within their range.

During colder weather, they start a hibernation period and generally, choose to stay in the water.

Florida Softshell Turtles can be found in swamps, lakes, streams, ponds, canals and road-side ditches. They range from South Carolina to Florida to southern Georgia.

Male Florida Softshell Turtle attracts a female by rubbing his chin on her carapace and/or bobbing his head at her.

The period of nesting happens between mid-March and July. In just one nesting season, a female can nest 2-7 times and she can produce 225 eggs annually. The female leaves the water when she lays her eggs and starts by digging a hole in the sand or mud near the edge of the water. On average, she will lay 10-30 eggs in this hole. A female can lie anywhere from 3-100 eggs at one time. Regardless of the temperature of the nest, the eggs can contain female and male hatchings. On average, a turtle’s gender is based on the temperature of the nest. Florida Softshell Turtles will use existing holes by alligators to protect their young. There isn’t a single species of turtle that nurtures its young.

The life cycle of a Florida Softshell starts with an embryo. The eggs are laid in clutches so that oxygen can reach the egg shells, which is needed for the incubation period. The eggs are oval and about 1-inch in diameter. It takes 70 days for the development of the embryo from organogenesis to tissue development to cells division and finally to the growth of the embryo. While the female is at the nest, the eggs are protected but the female will leave to return back to the water. It becomes the hatchlings job to get back to the water, safely. Predators such as raccoons find the eggs and dig them up for food. 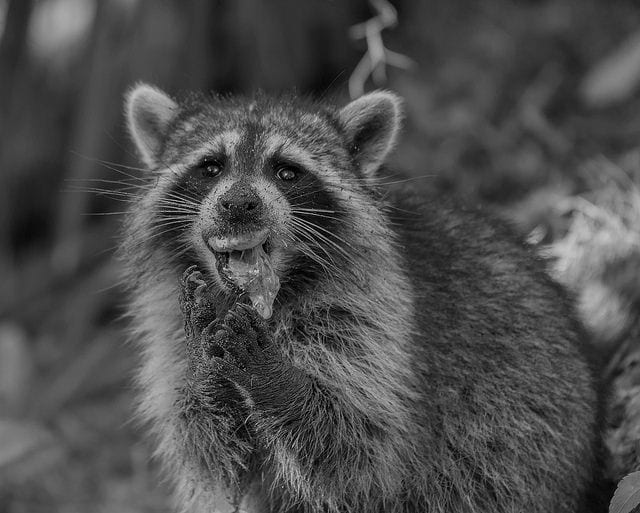 Raccoon eating softshell turtle eggs after digging them up 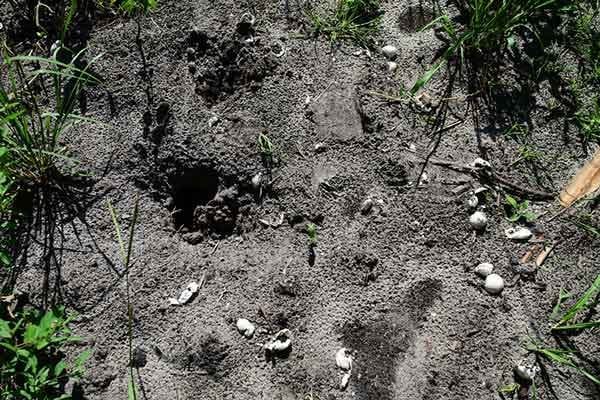 Soft shell turtle eggs dug up and eaten by a raccoon

After surviving predation (the period of time where predators are lurking), the hatchlings are born 2-3 months later. Hatchlings break out of their eggs by using their front claws and egg tooth. They are 1.25 inches in size and have bright patterns all over them. Gray spots and an olive-yellow hue creates their base while their head is covered in yellow and orange markings. Hatchlings are independent and will feed on vegetation, small fish, snails, tiny invertebrates and larvae. Their carapaces are very round while they are young but they change to an oval shape as they grow. They generally began to emerge from their shells between August and September.  Since they are so small, predators are continuous struggle as they make their way back to the water.

As hatchlings start aging they become known as juveniles and they start to lose their bright coloration. Juveniles are the same shape as adults and their shells are olive-yellow in color with large, round dark spots. They still have yellow and orange marks on their head, though those will fade as they become adults. They are about 3 inches in length and females grow at a faster rate than males, though both gender growth rates depend entirely on food supply.

During this life phase, Florida Softshell Turtles are known as sub-adults and their plastron is between 80-85 mm long.  They also start to feed on larger prey such as larger fish and worms. Males become sexually mature during their fourth year while females become active during their ninth year. This allows the entire reproduction process to start all over again.

Chris spends his time photographing and taking video of wildlife and nature. He spent 2 years in high school studying forestry (Gainesville, FL) and is currently studying to be an Advanced Master Naturalist at the University of Florida. His mission is to inspire others to get outside and learn.
View all posts by Christopher
American Bison Facts and American Bison Wildlife Video
Roaming Cattle In Our Florida Parks