I shot this 4K wildlife video of the green heron I found along Black Point Wildlife Drive along the Florida Coast. In this video, you’ll watch as the bird hunts for fish along the banks of a wetlands area. I also included some green heron facts below.

Like most herons, Green Herons are stocky and short with thick necks which are drawn up into their bodies. Their wings are very round and they have a long dagger-style bill. At times, they raise their crown feathers up in to a short crest on their heads. They have a deep green back and crown while their neck and breast is a chestnut hue. Their neck is streaked but becomes harder to see since they tend to tuck their necks in often. Green Herons appear dark in color except for when the light hits their wings and then the green can be seen. When in flight, Green Herons look like tailless crows and often unfold their neck which helps viewers to recognize them. In doing this, it looks like they are front heavy birds. 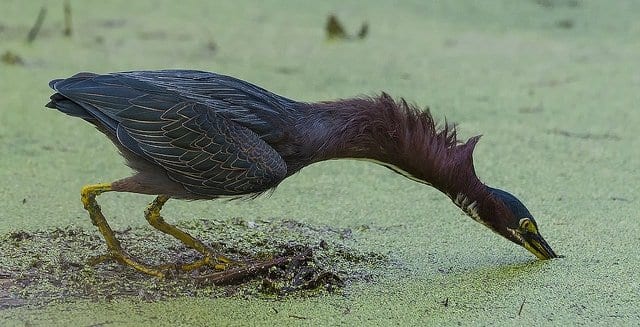 Adults and juveniles differ due to the fact that adults have a green color and the juveniles are brown in color. Juveniles also have a dark spiky cap on their heads, spots on their wings and they are smaller.

They have a harsh call when in flight or when alarmed that sounds like “skeow” and they make a series of kuk-kuk-kuk-kuk sounds.

Both genders are the same size.

Socially, Green Herons are typically tolerant of other herons when hunting. As they come across another heron, a more dominant Green Heron will chase the other bird away. When herons are nesting, they usually tolerate each other a little more since they nest in colonies. Green Herons are devoted parents and both sexes care for and rear their young.

Green Herons rest during the day with their neck folded up, in a sheltered spot. During the night, they can be found sleeping in trees. This gets them off the ground where predators can’t easily get to them.

Green Herons typically flick their tail and raise their crest when out in the open. They also fly away from disturbances while defecating behind them while smaller herons defecate forward.

They build their nests in coastal and inland wetlands like swamps with plenty of shrubbery. Sometimes they nest in dry wooded areas or even orchards as long as there is a water source nearby. During the winter, Green Herons spend their time in the south coastal marine and freshwater areas, throughout Mexico and Central America.

Green Herons can be found on branches or sticks on the water’s edge stalking their prey. Typically, they stay very still in shallow water to catch small fish or amphibians that come near them. They usually stay on solid ground or vegetated areas for hunting verses wading through the water. When a fish or other source of prey approaches the Green Heron, the bird uses its sharp bill to spear it. They hunt night and day.

They will also use sticks, bread crusts, a feather or even other insects as bait to catch small fish and they can be found visiting ornamental fish pools.

Young Green Herons will hunt on the shoreline verses wadding in the water like adults.

Green Herons build their nest in small groups and are hardly ever seen in large colonies. The male chooses where the nest will be and begins to call from a perch or shrub, somewhere that is hidden away. He starts to stretch his neck forward and snap his bill shut, swaying back and forward. His intent is to call a female. Males and females can be seen performing flight displays around their chosen area. The nest is usually 5-30 feet off the ground and often close to water. It is constructed with sticks that the female bird brings to the male so that he can construct the nest. The building of the best begins before the birds have mated. The nest is 8-12 inches long with a depression of 2 inches in depth. Some nests are solid while others flimsy because they have no lining. Sometimes old nests are renovated but usually new nests are built each mating season. Sticks are added to the nest during the entire breeding season.

When they are born, the younglings are helpless but their eyes are open. They are covered with a grayish down. Both parents feed their young by regurgitated into their mouths. They start to climb around in the nest when they are about 16 days old. They usually peek out of the nest when they are 22 days old and they typically start to fly. At this time, they are still fed by their parents but are capable of swimming.

Chris spends his time photographing and taking video of wildlife and nature. He spent 2 years in high school studying forestry (Gainesville, FL) and is currently studying to be an Advanced Master Naturalist at the University of Florida. His mission is to inspire others to get outside and learn.
View all posts by Christopher
Snowy Egret Facts & 4K Wildlife Video Of Them Hunting Fish
Florida Aquarium Shark Tanks in 4K 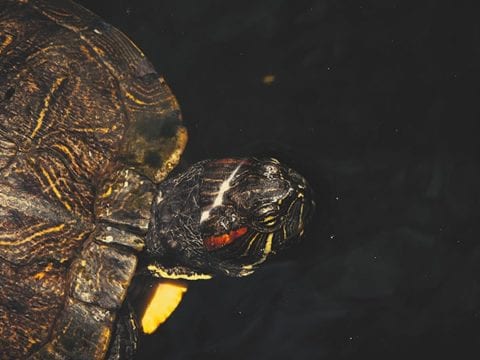