The bald eagle is my favorite bird to film so I visited the Audubon Center For Birds of Prey to learn more about bald eagle facts. I hike along a number of rivers to film wildlife so I’m always seeing them either up in trees or diving into the river hunting for fish. Their nests are very big so as I hike along the Potomac River on the Virginia side, I keep an eye out. I’ve been very lucky to see them up close sitting in trees watching me as I hike by. I film a lot of osprey and see them flying along the river as well, but when an eagle flies over you, you know it because of the size of the bird.

I shot the video above at the Audubon Center For Birds of Prey which is located in Maitland, FL. They had a number of rescue eagles there getting help.

Though Bald Eagles are not really bald, they do have a white head which creates the depiction that they are indeed bald. One of the larger birds in North America, the Bald Eagle has a heavy chocolate-brown body, white head and a large golden, hooked beak. Its large brown wings straighten out flat like a board during flight. Their tail is long and appears slightly wedge-shaped.

A baby bald eagle, called an Eaglet are small at birth but grow very rapidly, adding a pound every 4-5 days. They have dark heads and tails but their bodies and wings are brown with varying speckles of white through it. At three weeks, the Eaglet stands about one-foot tall. Their beak and feet are nearing adult size. 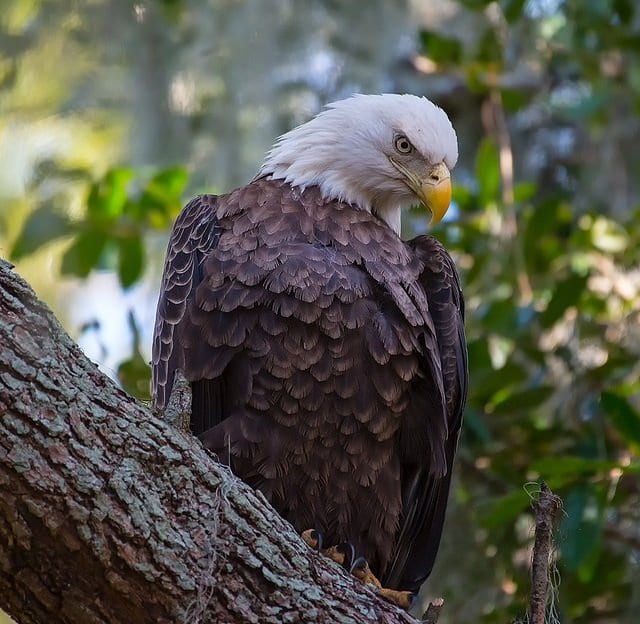 Adult bald eagle sitting in a tree at Circle B Reserve in Lakeland, FL

Bald Eagles are known for their powerful flying abilities but they are also known for the preying. They can reach speeds up to 35-43 miles per hour and their dive speed is 75-99 miles per hour. They usually hunt over water or in open fields where they can get a clear line of vision. They target their prey, such as a deer and then swoop down to grab it with their massive talons. Often Bald Eagles will look to the road for their meals and many will get hit by a car because of it. They primarily eat fish that they catch themselves but they will eat dead fish that they find or steal other fish from other birds as well.

Bald Eagles usually build their nests in areas of forestation close to bodies of water and away from lands that are heavily developed.

Largest Eagle nest on record was found in St. Petersburg, Florida, it was 2.9 meters in diameter and 6.1 meters tall. A popular nest weighing almost one ton, shaped like a wine glass was found in Vermilion, Ohio where it stood for 34 years until the tree holding it blew down.

Bald Eagles become sexually mature by the age of five. Once they are old enough to breed, they will most often migrate back to where they were born. Many birds mate for life and Eagles do not differ from that. However, if one mate dies or disappears the other will find another mate. Another caveat to mating for life is the breeding chances, if a pair of Eagles has tried many times to breed and have failed; they will split and look for a new mate.

To attract a mate, Bald Eagles will use a slew of different options such as extravagant calls for mating and elaborate flight displays. These displays include chases, swooping and even cartwheels. They will fly really high, lock their talons and then free fall, allowing themselves to separate right before they hit the ground.

On average, there are about 10,000 pairs of Bald Eagles mating.

Bald Eagles are partially migratory but it all depends on their location. If they are around open water and have access to it, they will remain in that area for the entire year. However, if the water becomes frozen due to the winter, they cannot get food and so they will migrate to the south or to the coast. There are some exceptions. Florida Bald Eagles will head towards the north during the summertime. Eagles will choose to migrate to particular areas based on food sources, updrafts and thermals. For migration, Eagles use the thermal air to ascend and then glide down. The updrafts can also be used for a source for Eagles to get ascension in. Migration usually takes place during the daytime. During the winter, they spend about 90 percent of their day, roosting.

Chris spends his time photographing and taking video of wildlife and nature. He spent 2 years in high school studying forestry (Gainesville, FL) and is currently studying to be an Advanced Master Naturalist at the University of Florida. His mission is to inspire others to get outside and learn.
View all posts by Christopher
Hooded Merganser Facts
Mallard Duck Facts