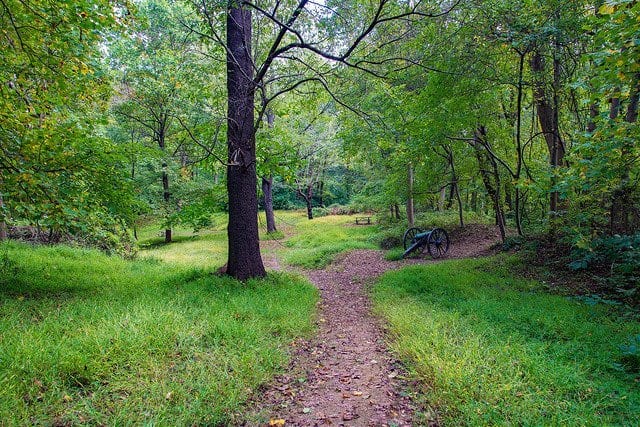 If you are going to be in our nation’s Capitol and want a great place to visit that had a lot of historical value, Fort Marcy is hot spot to put on your list to see. Plus, it’s got great nature spots and many hiking trials so it’s completely outdoorsy and peaceful.

There is so much to see at Fort Marcy from gun embrasures to mortar platforms to magazine dugouts to trenches to rifle pits and earthwork walls. Everything is still is great preservation so you can really get a feel for the era. Taking a walk through the fort is like taking a walk through history itself.

You can find this fort/public park in McLean, Virginia. The fort is located on a hill known as Prospect Hill. It is about ½ mile south of the Potomac River and it has a perimeter of 338 feet.

Fort Marcy was designed to protect Leesburg Pike and Chain Bridge. It was part of the Civil War Offenses in Washington D.C.

In 1861, the fort was began construction and at that time, it went by a different name, Fort Baldy Smith. It was named after General William Farrar Smith and his troops whose division started construction on the fort. On September 24th, 1861, General Smith’s division crossed over the Chain Bridge during the night and started the construction process immediately. They constructed two forts, Fort Marcy and Fort Ethan Allen.

The construction process took a year but in 1862, it was complete thanks to help from the Iron Brigade and other numerous troops. In fact, the troops that came together to build Fort Marcy and Fort Ethan Allen became the famous Iron Brigade in the summer of 1861.

When the Civil War ended, the land Fort Marcy was built on was returned back to its rightful owner, The Vanderwerken Family where it remained until after World War II. It was then purchased by the Delashmutt Family.

If you aren’t a history buff but the name Fort Marcy sounds familiar to you, it’s probably because the fort was in the media a little more than 20 years ago. Former Deputy White House Counsel Vince Foster’s body was found on the grounds after an apparent suicide on July 20th, 1993.

In today’s time, the fort is a wildlife corridor that is popular for hiking, running and walking. It is a beautiful nature spot with an amazing view.

Chris spends his time photographing and taking video of wildlife and nature. He spent 2 years in high school studying forestry (Gainesville, FL) and is currently studying to be an Advanced Master Naturalist at the University of Florida. His mission is to inspire others to get outside and learn.
View all posts by Christopher
Manassas National Battlefield Park – Bull Run Hiking Review
US Capitol Remains In Washington, DC