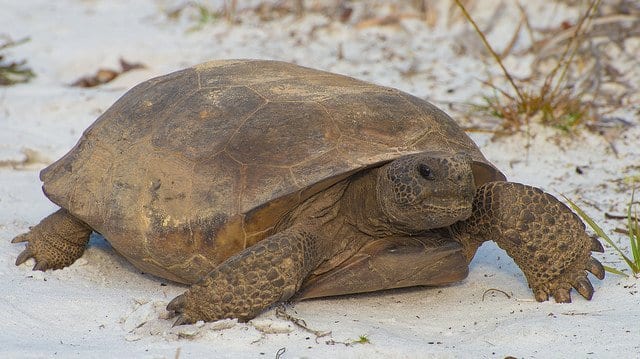 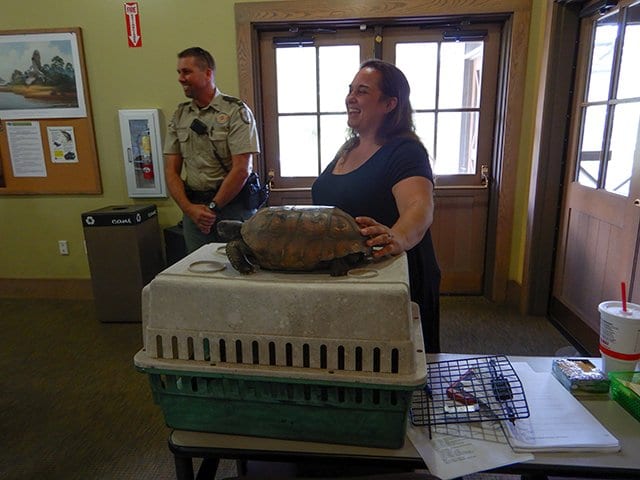 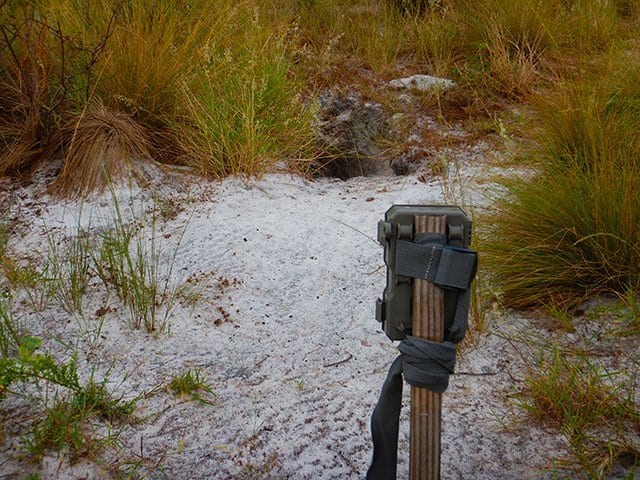 I’m currently taking courses through the University of Florida to get my Advanced Florida Master Naturalist Certification and I was in my Environmental Interpretation class. We got a call from the Florida Fish and Wildlife Conservation Commission that they were going to bring a rescued gopher tortoise to us so we could clear it for disease, mark it and release it into the on-site sanctuary.

The officer arrived and told us a FedEx driver was delivering a package to someone’s porch when he saw a bucket with a gopher tortoise in it. The driver was aware that gopher tortoises are classified as “Threatened.” He then called the authorities and an officer spoke with the homeowner to find they saw the gopher tortoise crossing the street and collected him in the bucket to release him later that day near a lake. The officer explained that it was nice to try and help but that the tortoise’s habitat was elsewhere so he was collected and brought to our class that day.

Upon arriving at our class, our instructors inspected the gopher tortoise for any signs of injury and found none. They then marked the gopher tortoise with a number so it could be tracked on the wildlife monitoring cameras. The gopher tortoise was then quarantined for a number of days to ensure he didn’t have any diseases he could spread. He turned out to be just fine and he was released into the sanctuary to start a new life.

Here are some gopher tortoise facts and a 4K wildlife video I shot during one of my hikes.

What Is The Current Status Of The Gopher Tortoise?

The Gopher Tortoise is considered “Threatened.” Because of this status, the gopher tortoise and it’s burrows are protected under state law. Research has to be done prior to any land being cleared due to development. If any sign of the gopher tortoise exists, it must be excavated and relocated. In Florida, gopher tortoise numbers have dropped to about 30% of their original numbers.

How Many Gopher Tortoise Species Are There?

There was once 23 species of gopher tortoise but now there’s just 4 total.

Where Does The Gopher Tortoise Live?

They are found only in the Southeastern United States. They burrow into the sand and produce tunnels to live in. Their burrows can be up to 40 feet long and 10 feet deep and they use their front legs to shovel the sand when burrowing these tunnels. The width of their burrows are about the same as the tortoise so they can turn around easily underground.

What Type Of Habitat Do They Live In?

Gopher tortoises live in dry habitats such as:

What Do Gopher Tortoises Eat?

Do Other Species Live In The Burrows?

Gopher tortoises are a keystone species and provide housing for 360+ other species. Some of their residents include: indigo snakes, opossums, rabbits, quail, armadillos, burrowing owls, snakes, lizards, frogs & toads. The burrows come in handy to protect these species when there is a wildfire as the burrows helps them escape from heat and smoke.

When Do Gopher Tortoises Mate?

Gopher tortoises normally mate during April and May. A few weeks after this period, females lay 3-15 eggs in a sand mound near their burrow. Gopher tortoises have to be mature to mate and this is generally at the age of 15 years.

What Is The Incubation Period?

The incubation period varies from 70-90 days in Florida. It can be 100 days in Georgia. A mature female produces one clutch of eggs annually. Eggs can be eaten by armadillos, raccoons, foxes, skunks, alligators & fire ants. Many hatchlings are eaten by these predators as well.

How Old Can A Gopher Tortoise Grow To Be?

If they are able to grow to a large enough size, they can live in excess of 40 years. Predators can eat them when they are small.

What Is Causing The Decline In Gopher Tortoises?

A lot has to do with habitat loss. Land is being used now for urban development. Forestry practice can also have an affect. There is state protection and sanctuaries for relocation but very few eggs that are laid make it past the predators. Gopher tortoises don’t mate until they are mature which can take 15 years. Other causes for high mortality rates include death by automobiles, disease, poachers, mining, herbicides, pesticides and rattlesnake hunters putting gasoline into the burrows.

What Can I Do To Help Gopher Tortoises?

There are several things you can do to help the gopher tortoise. The most important is education. I ask that anyone who reads this article, spread the word about their habitat, notes, pictures and also use the links below for additional information that can be helpful.

Chris spends his time photographing and taking video of wildlife and nature. He spent 2 years in high school studying forestry (Gainesville, FL) and is currently studying to be an Advanced Master Naturalist at the University of Florida. His mission is to inspire others to get outside and learn.
View all posts by Christopher
Florida Cracker Horse Facts (Wild Horses) – Paynes Prairie Preserve State Park
Hiking Central Florida In Time Lapse Nature Video