I was hiking this afternoon and came across a tree filled with great egret nests. I spent the afternoon filming the babies being fed and trying to use their wings. Here are some great egret facts so you can learn more about the bird and a 4K wildlife video of them in action.

Great Egrets are tall and covered with white plumage. They have a long, yellow neck which is curved in S-formation when they are in flight. They have long black legs and feet that are tucked in during flight. They have a short tail and a long yellowish-orange dagger-like bill. During breeding season, their bill and lower legs may become lighter. Males, females and juveniles are identical in appearance. 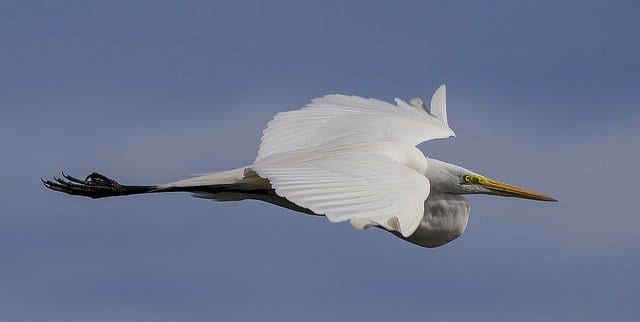 A Great Egret In Flight

Their flight is slow and their neck is retracted which is a characteristic of herons, and bitterns but sets them apart from cranes, storks, and spoonbills who all extend their neck when in flight. While walking, the Great Egret extends its neck and keeps its wings tucked in.

Both sexes are the same size. Here is a breakdown:

Great Egrets like to wade in fresh and salt shallow waters while hunting for small aquatic animals. As unsuspecting prey passes by them, they stay very still allowing them to pass by. They use their dagger-like bill and long neck as a huge advantage over their prey. Sometimes they forage in open fields, around cattle.

Usually found in flocks, Great Egrets like to stick to their own or with other heron types. They are colonial nesters and will place their nests up in trees to keep their eggs away from predators like raccoons.

Great Egrets are found in salt water and freshwater, they feed in wetlands, tidal flats, ponds and streams. Their main source of food is found in water so they tend to hang around swamps, fish-rearing ponds, flood fields, rainforests, rivers, lakes, impoundments, etc.

During breeding season they live in trees or shrubs and can be found spread throughout the southeastern states of the U.S. and southern Canada.

Great Egrets eat frogs, snakes, crustaceans, fish, lizards, insects, birds and small animals that roam near the water. They also steal food from other birds. Great Egrets can be seen hunting for their prey in small flocks or off by themselves. Typically, they will wait very still and patient for their prey to come to them and watch as their prey passes them by. At which point, they will quickly spear them. This is called a deathblow and their prey is quickly swallowed whole. Most often this technique is used on fish but Great Egrets will also spear mice, reptiles, amphibians and other small animals this way.

Spring and summer are mating season for Great Egrets and they produce one brood a year. They like to build their nests up high in the trees (like live oaks or redwoods) so that predators have a harder time attacking them and stealing their eggs. They can be found in groups together known as colonies which can include nests built by other egret or heron species. They breed when they are 2-3 years old. A male will select the nest area and use he displays to attract a female. After mating, they both work together to build the nest. They build their nests near water that is hidden by thickets, shrubs and trees, as that is their main food source. Great Egrets are monogamous and both parents will incubate their eggs.

The nest is three feet across and 1 foot deep. The inside is lined with pliable plant material that dries up to form a cup-like structure. Nests are usually not reused year after year.

Both male and female incubate their eggs for 23-26 days. Females will lay around 1-6 eggs. Most often there is just one brood per year, but sometimes there are two. The eggs are 2.2-2.4 inches long and 1.6-1.7 inches wide. They are smooth with a pale-greenish blue color.

When hatched, younglings are long with white down covering their back and their eyes are open. Younglings are aggressive toward each other in the nest and there are frequent occasions where one strong sibling kills a weaker sibling. This is known as siblicide and it is nature’s way of stating that only the strong will survive. Both parents feed the younglings through regurgitation. At three weeks, the younglings will start to climb out of the nest but they do not fledge until they are six or seven weeks old.

Chris spends his time photographing and taking video of wildlife and nature. He spent 2 years in high school studying forestry (Gainesville, FL) and is currently studying to be an Advanced Master Naturalist at the University of Florida. His mission is to inspire others to get outside and learn.
View all posts by Christopher
Myakka River State Park & Deep Hole 4K Cinematic Nature Video
Black Hammock Wilderness Area Cinematic 4K Nature Video