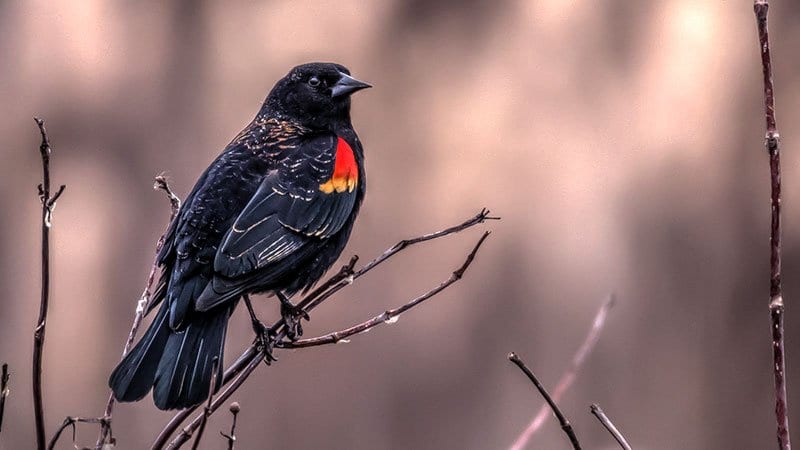 When I first started hiking around the Potomac River in Virginia is when I first started to notice the red winged blackbird. At first, I thought it was some type of Oriole because of how fast he flew by me and I’ll I saw was orange and black on it. I happened to be out with some birders and they filled me in. The picture of a male above was taken in Huntley Meadows Park in Alexandria, VA. Here are some facts on the red winged blackbird.

A video that I shot showing a balding red winged blackbird. After some research, I found that some birds can get avian alopecia. This is a condition that causes loss of feathers in areas that are hard to preen, like the head portion of a bird. It typically happens during mating season as that brings on a lot of stress for them. The condition should improve over time. Watch the video for more information.

The red winged Blackbird is one of the more abundant and radiantly colored birds across North America and is sexually dimorphic.

Males have a glossy-black tone to their body and broad-shoulders layered with scarlet and yellow patches, the females resemble that of a dark, larger sparrow.

Same as summer male except for the warm brown feather tips spread out the body.

The females are predominantly different from the males based on their color. They have brown feathers with a white supercilium and peach-colored chin/throat, they resemble sparrows. 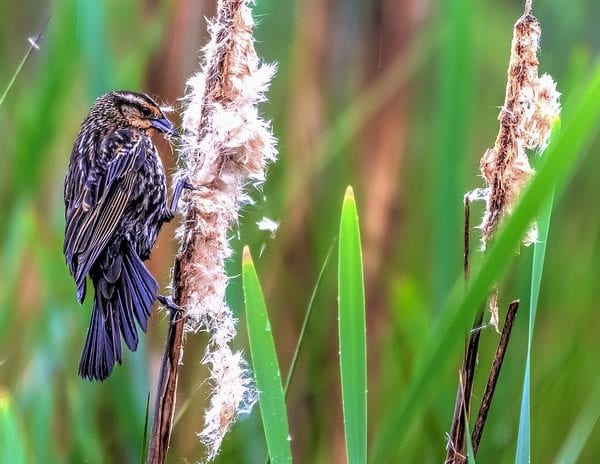 Same as winter male but with more brown and more fluff.

Same as winter female but their chin/throat is not peach-colored.

While both males and females sit with a hump-back, have a small, conical bill and a medium-sized tail. The male birds usually sit with their tail slightly flared out while females have a paler breast and a white eyebrow line. The red winged Blackbird male likes attention and therefore strives hard to get it. For example, the male will sit on high cattails and sing a loud song throughout the day, all day. Their call is very hoarse and gurgled. It is his way of boasting toward females, protecting his area and marking his territory, which is very important to the red winged Blackbird. Females are different because they stay low profile where they can forage for food and weave their nests. Their eyes, beaks and feet are all black.

Both genders eat insects during spring/summer and forage for corn, wheat, ragweed and sunflowers during fall/winter. The red winged Blackbird is omnivorous, they eat plants, corn, rice, insects and other small animals such as butterflies, flies, moths, spiders, mollusks, worms, frogs, dragonflies, damselflies, snails and even eggs.

Both Male and Female

The red winged Blackbird females usually lay 2-3 broods per breeding season and with each new brood, a new nest is built to decrease parasite risk. Each brood contains approximately 4 eggs. The nest is weaved brilliantly with plants foraged by the female and usually spans 4-7 inches across and 3-7 inches in depth and can be found in shrubbery or trees but are usually built on marshes to allow for foraging of seeds, rice plants and wheat. While the males like to boast and sing and the females gather and tend to the nest, both genders come together as a unit if the nest is being threatened by a predator.

Males spend more than a quarter of the daylight hours protecting their breeding grounds from crows, ravens, magpies, foxes, rat snakes, raccoons and herons. Male birds will also swoop down at humans if they feel their nest is being threatened. They are extremely protective and territorial. Because nests are very hard to keep safe from many different types of preying animals on the ground and in the air. red winged Blackbirds use a tactic called Group Nesting. This helps to increase the amount of parents who are watching over the nest. Also, the color of the female feathers can act as a camouflage in the nest through the incubation process. This allows them to better hide themselves and their eggs from outside animals that wish to eat them.

Chris spends his time photographing and taking video of wildlife and nature. He spent 2 years in high school studying forestry (Gainesville, FL) and is currently studying to be an Advanced Master Naturalist at the University of Florida. His mission is to inspire others to get outside and learn.
View all posts by Christopher
US Capitol Remains In Washington, DC
Hooded Merganser Facts